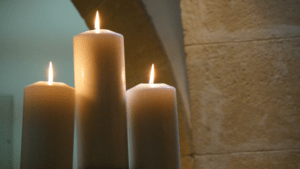 Christmas has always been associated with the singing of Christmas Carols, and one of the favourite services in many churches is the traditional “Nine Lessons and Carols”. The service is so traditional that many people think it must have been part of the Church’s worship for hundreds of years. But the reality is a little different.

While it is true that the sacred songs which we call Christmas Carols have been sung for centuries, the service of Nine Lessons and Carols has a relatively recent history.

In 1878 the Royal Cornwall Gazette reported that the choir of Truro Cathedral would sing a service of carols at 10:00 p.m. on Christmas Eve.

“The Choir of the Cathedral will sing a number of carols in the Cathedral on Christmas Eve, the service commencing at 10pm. We understand that this is at the wish of many of the leading parishioners and others. A like service has been instituted in other cathedral and large towns, and has been much appreciated. It is the intention of the choir to no longer continue the custom of singing carols at the residences of members of the congregation.”

Two years later, Edward White Benson, at that time Bishop of Truro in Cornwall but later Archbishop of Canterbury, formalised the service with Nine Lessons for use at 10:00 p.m. on Christmas Eve (24 December) 1880. Over 400 people attended this first service.

The original form of the service has since been adapted and used by other churches all over the world. Lessons and Carols most often occur in Anglican churches. However, many Christian denominations have adopted this service, or a variation on this service, as part of their Christmas celebrations.

The best-known version is broadcast annually from King’s College, Cambridge, on Christmas Eve. It features carols sung by the famous Choir of King’s College.

Less well-known perhaps, but just as traditional, is the service held in St. Andrew’s Church, Kyrenia. This year’s Nine Lessons and Carols in St. Andrew’s will be held on Sunday 19th December at 4.00 p.m.

Sadly because of Covid restrictions we will be unable to serve the traditional mulled wine and mince pies in the church hall.

All are very welcome to attend but please see here  for requirement for entry to the church following the latest government Covid restrictions.

Again because of Covid restrictions it may be necessary to use the overspill facilities of the Church Hall if the number of people attending exceeds the enforced capacity of the church itself.