St. Andrew’s Music Week 2017 finished with a magnificent Choral Eucharist on Sunday 28th May, the culmination of a wonderful week of music, both choral and instrumental, ably led by St. Andrew’s Director of Music Earl Moffitt and featuring our guest composer and accompanist NykkÖ-Michaël Grégoire and St. Andrew’s Choir. 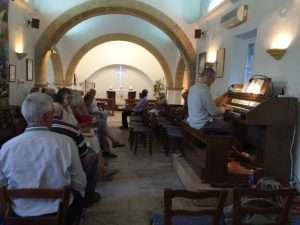 The week began on Tuesday 23rd May with a Festival of Favourite Hymns hosted by the Chaplain, the Revd Wendy Hough, with NykkÖ as organist and recitalist. The hymns were chosen by members of the congregation. The eclectic mix included such classics as Abide with Me, The Lord’s My Shepherd, Will Your Anchor Hold as well as more modern renditions such as Be Still and Seek Ye First. Included were solo organ pieces: the 1st movement of the Concerto in A minor by Vivaldi/Bach, BWV 593, which Bach arranged from Vivaldi’s Concerto Op. 3 No. 8 from L’Estro Armonico; Andante Tranquillo from Sonata No. 3 by Felix Mendelssohn; and Fanfare (D Major) by Jacques-Nicolas Lemmens. This delightful evening ended with refreshments served in the south transept.

Thursday 25th May 2017 was the Feast of the Ascension of Our Lord. Although a major feast day in the Church’s Calendar, sadly it seems to have lost its importance in peoples’ minds – perhaps because it falls on a Thursday, 40 days after Jesus’ Resurrection on Easter Day.

But in St. Andrews’ it was celebrated by a Festal Choral Eucharist which replaced the normally contemplative regular 10.00am Thursday service of Holy Communion. The Celebrant and Preacher at the service was the Revd Wendy Hough and the hymns chosen were:

Once again the music was provided by our guest organist NykkÖ-Michaël Grégoire. 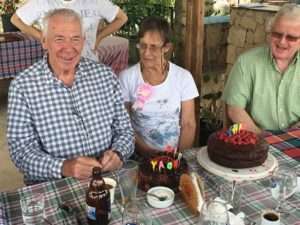 Following the service the choir repaired to the Halfway House Restaurant in Karaman (Karmi) for a delicious lunch organised by choir member Sue Carling. While there the opportunity was taken to celebrate the xxth birthday for one of the more chronologically-gifted and experientially-enhanced choir members Sheila Rose. Not one, but two delicious chocolate cakes were enjoyed by all present.

NykkÖ delighted all, including the young grandson of the restaurant’s proprietors Mehmet and his mother, Yaşın, with tunes on the Duduk, an ancient double-reed woodwind flute made of apricot wood which is indigenous to Armenia and the Bawu,  a Chinese wind instrument which, although shaped like a flute, it is actually a free reed instrument, with a single metal reed (information courtesy of Wikipedia). 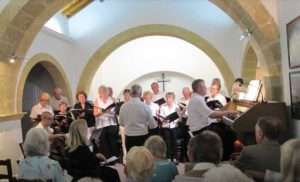 On Thursday evening The Ascension Day Concert featured NykkÖ, the St. Andrew’s Church Choir, directed by Earl Moffitt, with John Crothers as organist when NykkÖ accompanied the choir on cello.

The Concert opened with the trumpet tune The Cebell by Henry Purcell, played on the organ by NykkÖ. The Chaplain, the Revd Wendy Hough, welcomed the audience to St. Andrew’s and then the choir sang the Evening Canticle, Hail, gladdening Light (Φῶς Ἱλαρόν) set to music by John Stainer.

This was followed by an audience hymn, the stirring Hail the day that sees him rise by Charles Wesley to the tune Llanfair. This tune formed the foundation for improvisation on the organ by NykkÖ, which he followed with two anonymous pieces Gavotte d’Henri IV and Gavotte de Louis XIV.

NykkÖ then played two beautiful melodies: one from Armenia on the Duduk and one from China on the Bawu. 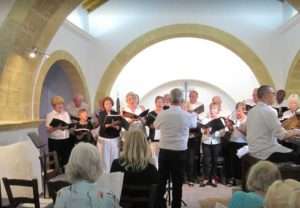 There then followed the world premiere of Anthem for Kyrenia written by NykkÖ Grégoire especially for the St. Andrew’s Music Week 2017 and dedicated to Earl Moffitt and the Revd Wendy. Sung by the Choir, the piece is based on Hebrews 13:2: Be not forgetful to entertain strangers, for thereby some have entertained angels unawares. [KJV], and reflects the ongoing Ministry of Welcome to the whole community here in Kyrenia and beyond being practiced in St. Andrew’s under the Revd Wendy’s leadership. The Choir was accompanied by NykkÖ on the cello and John Crothers on the organ.

The Ascension Day was read by Diana Peek, a member of St. Andrew’s congregation.

Once more the audience joined in singing of the hymn Angel voices, ever singing by Edwin G. Monk, opening flourish and descant by the late John Cooke.

The Choir then sang three pieces with strong Irish connections:

Fans of Phantom of the Opera were then entertained to a magnificent rendition of Bach’s Toccata and Fugue in d minor by NykkÖ! 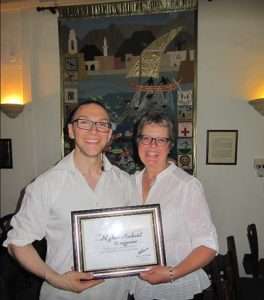 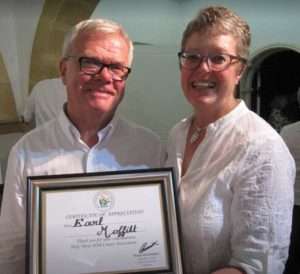 ded with all present singing the hymn Christ triumphant, ever reigning by Michael Saward during which a collection was made for TULIPS, the North Cyprus Help Those With Cancer Association. The sum of TL1087 and Stg£60 was generously donated by those present.

Again the audience repaired to the south transept for refreshments.

As previously intimated St. Andrew’s Music Week 2017 ended with a Choral Eucharist on Sunday 28th May at which once again the Celebrant and Preacher was the Revd Wendy Hough.

The service began with the organ prelude Heut Triumphieret Gottes Sohn., BWV 630 by JS Bach played by NykkÖ Grégoire. This was followed by the Choir Introit, a repeat of Let all the world in every corner sing, words by George Hebert arranged by the late Rodney Bambrick.

The Processional Hymn was Look, ye saints, the sight is glorious by Thomas Kelly to the tune Regent Square.

The Psalm was a rendition by the Choir of verses from Psalm 68, the psalm appointed for the Sunday after the Ascension Day – Easter 7. The setting was by Alison Cadden and follows the Irish theme in that it came from the publication Singing Psalms, Responsorial Psalms set to Simple Chant by Alison and the Revd Dr Peter Thompson, a publication from the Liturgical Advisory Committee of the Church of Ireland.

The Gradual Hymn was O Holy Spirit, Lord of grace, words by Charles Coffin to the tune Tallis’s Ordinal.

Once more the Choir sang ‘How shall they hear’ who have not heard, words by Timothy Dudley-Smith arranged by Canon Martin White.

The Offertory Hymn was Beauty for brokenness by Graham Kendrick to the eponymous tune.

The Communion Anthem was Father we love you, we worship and adore you, words and music by Donna Adkins, arranged by N Warren with a descant by W Llewellyn.

The Communion Hymn was Abba Father, words and music by Dave Bilbrough, arranged by A F Carver

The Post Communion Hymn was Ascended Christ, who gained the glory that we sing by Christopher M. Idle to the tune Christchurch

Our guest musician  NykkÖ Grégoire played the final organ voluntary Grand Jeu from Livre D’Orgue by Pierre Du Mage which was followed by the Final Hymn Christ triumphant, ever reigning by Michael Saward.

All agreed that this year’s St. Andrew’s Music Week had been a great success and sincere thanks go to all who made it possible, not least Compass Cyprus Chartered Surveyors who sponsored the printing of programs for the Music Week.

But special thanks must go to our guest this year, NykkÖ-Michaël Grégoire.

This site uses Akismet to reduce spam. Learn how your comment data is processed.