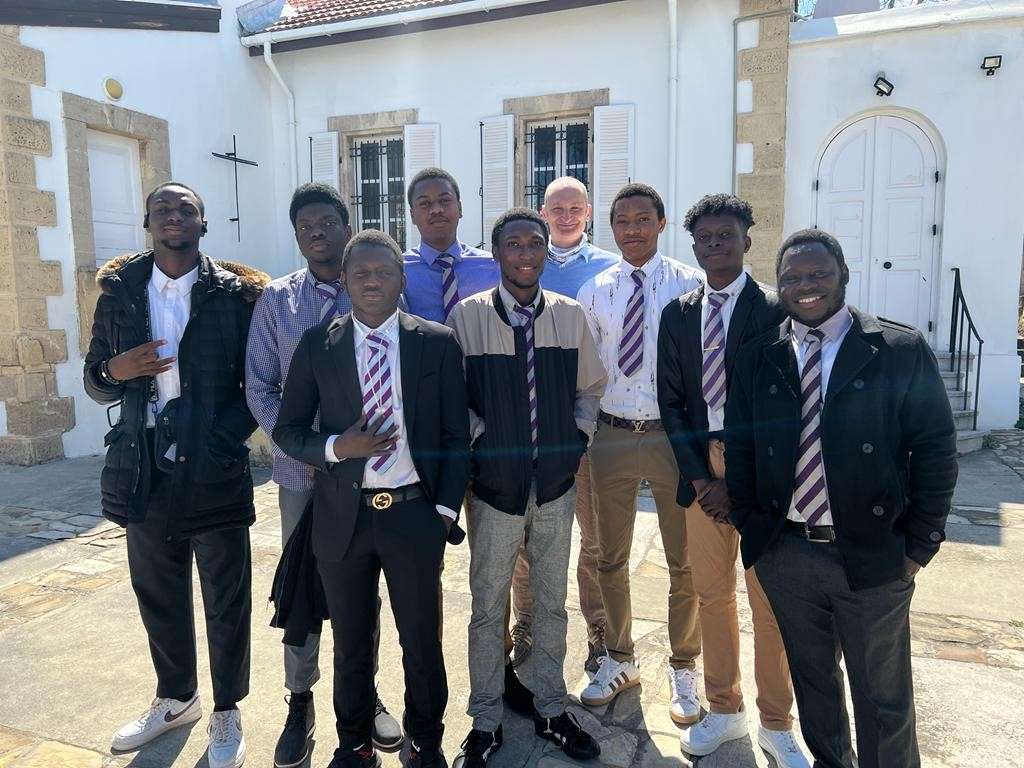 On Sunday 27th March St. Andrew’s was blessed by a surprise visit from a group of young men, Old Boys of Sierra Leone Grammar School, who are all undergraduates here in the TRNC.

March 25th (Lady Day) is a special day for alumni of the Grammar School because it was on that day in 1845 that the school was founded. From the school’s website (https://www.slgsaanadc.org) we read:

“The history of the founding of the Grammar school is tied up with the early fortunes of the Colony of Sierra Leone and the early history of the other Institution founded by the CMS (Church Mission Society) around the same time, the Christian Institution that became Fourah Bay College.

The CMS started in 1799 as the “Society for Missions to Africa and the East”. It was founded by the Abolitionists, people like William Wilberforce and Henry Thornton who was the first treasurer of the new society, and Chairman of the Sierra Leone Company which ruled Sierra Leone at its inception. The name of the society was later changed to the CMS. Soon after its founding, the CMS turned its attention to Africa and its first missionaries were sent to Africa in 1804.

The Grammar School set the tone for secondary education throughout Sierra Leone and West Africa. For twenty years it was the only secondary school in West Africa. By 1849 its roll included pupils from the entire sub-region of West Africa many of them fee paying students while a few were financially supported by the CMS, the African Native Agency mentioned earlier and some philanthropic bodies. At the end of 1850, the enrolment was fifty-five scholars and school fees collected totalled 187 pounds 16 shillings and 2d.

The school started with 14 pupils, drawn from students of Fourah Bay College and was housed at Regent Square in a massive building which still exists.

Over the years, the school became famous for the education, discipline, and career prospects which she provided. With the availability of boarding facilities at Regent Square, the school attracted pupils from various parts of the country and the African continent at large thus creating the special Regentonian characteristic of dogged determination in the pursuit of goals. It was partly through the quality education provided by the school that Sierra Leone earned the cherished name of “Athens of West Africa”.

In 1962, the school moved to the present spacious site of about 50 acres at Murray Town with tremendous opportunities for development. The school has always been responsive to new educational ideas and programs, which have been refined and successfully welded to her basic traditional structure. She has led the way in many fields and contributed greatly to the training of skilled manpower for national development. Regentonians can be found playing leading roles in many spheres of life at home and abroad thus reflecting the school’s continued commitment to discipline and quality education for excellent service.

After an independent existence of a century during which the school was solely managed by the Church Mission Society, she became a Government-Assisted School with the Government assuming greater responsibility for the payment of teacher salaries and providing occasional grants.”

The young men who visited us told us that because the roots of the CMS were in Anglicanism, alumni will gather in their local Anglican church during the last week of March wherever they are in the world to join the local congregation in their worship, and to give thanks and praise to God for the blessings which they, and we, enjoy.

Finally they gave us a rendition of the Sierra Leone Grammar School song, to the delight of all present. A fine body of young men, a credit to their school, who joined us afterwards in the Hall for refreshments.

We wish every blessing on these students and their school and look forward to their revisiting us in the coming weeks and months.